The contrast between the activists outside, and the decision-makers inside, the Glasgow SEC is revealing. Each group has very different things to lose - and to gain. Only by recognising the differences can we grasp the entrepreneurial opportunity that ESG presents us with. 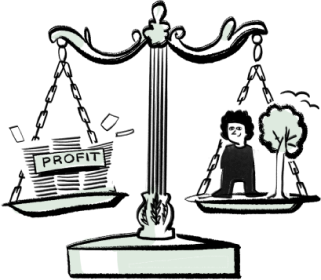 Outside the COP are the next generation; predominantly women, Black and Indigenous people with very little to lose economically and everything to gain socially and environmentally. Inside, are the decision-makers; predominantly middle-aged men with a great deal to lose economically and quite a lot of status and power to lose socially. Any potential gain to them is primarily indirect – perhaps benefitting their grandchildren and their legacy. The age difference between the two groups is pivotal – the ‘outsiders’ are fighting for their future 50-90 years from now. The ‘insiders’ are fighting to protect their interests for the next 10-20 years. Meanwhile, the clock on the crises of climate and inequality continues to run down…

The position of each group is what economists call ‘irrational discounting’. We humans generally value short-term gain over and above the prospects of a larger gain in the longer term (in traditional economics such behaviour is ‘rational’). The ‘irrational’ bit comes in when we continue to favour short-term gain despite evidence of long-term catastrophic loss. Faced with the IPCC’s (and others’) evidence of climate change that’s exactly what we are doing. I believe that ESG has the potential to turn the ‘irrational’ back into ‘rational’ behaviour.

ESG opens the possibility of a different view of business. A rational view in which the enormous new business opportunity of mitigating, preventing and recovering from the worst effects of climate and social crises can be grasped by companies of all sizes, the world over. It’s also part of a rational view that some of the negative impacts companies have on people and the planet (while pursuing the opportunity) can be reduced and compensation paid for damage caused or harm done. That’s the opportunity we have with ESG. What could be more rational than a re-invigorated economic model in which Government, society-at-large and companies all gain?

Founder & Chief Science Officer at ESGgen
We use cookies on our website to give you the most relevant experience by remembering your preferences and repeat visits. By clicking “Accept All”, you consent to the use of ALL the cookies. However, you may visit "Cookie Settings" to provide a controlled consent.
Cookie SettingsAccept All
Manage consent

This website uses cookies to improve your experience while you navigate through the website. Out of these, the cookies that are categorized as necessary are stored on your browser as they are essential for the working of basic functionalities of the website. We also use third-party cookies that help us analyze and understand how you use this website. These cookies will be stored in your browser only with your consent. You also have the option to opt-out of these cookies. But opting out of some of these cookies may affect your browsing experience.
Necessary Always Enabled
Necessary cookies are absolutely essential for the website to function properly. These cookies ensure basic functionalities and security features of the website, anonymously.
Functional
Functional cookies help to perform certain functionalities like sharing the content of the website on social media platforms, collect feedbacks, and other third-party features.
Performance
Performance cookies are used to understand and analyze the key performance indexes of the website which helps in delivering a better user experience for the visitors.
Analytics
Analytical cookies are used to understand how visitors interact with the website. These cookies help provide information on metrics the number of visitors, bounce rate, traffic source, etc.
Advertisement
Advertisement cookies are used to provide visitors with relevant ads and marketing campaigns. These cookies track visitors across websites and collect information to provide customized ads.
Others
Other uncategorized cookies are those that are being analyzed and have not been classified into a category as yet.
SAVE & ACCEPT